Tim is still getting his foothold in Thailand after 5 months in the Kingdom. It can be difficult to acclimate and learn the lay of the land unless you get out and start exploring. What better city is there to explore than central Bangkok? If you’ve lived your whole life in western culture, you’ll find Bangkok is really no different from any big city. Cities like New York in the US, London in the UK or Sydney Australia.

There are some oddities to get used too, but on the whole, you just need to get out of the house and go adventuring. I needed to go to the MBK centre to see if I could pick up a new pendant, which I lost while visiting Sukhothai. Tim was looking for an Apple keyboard so he could free up a port on his Mac Book. This meant we actually had a goal to achieve which justified the meandering around the city.

After wandering around the shopping district, I suggested we drop into Hooters at Silom for a beer. Tim has been banned from visiting my favourite bar on Sukhumvit so Silom seemed like a good destination. We did get there in time for the girls to do their funky dance routines which was a bonus for us and our viewers. Then we took a stroll down to Patpong to check out the night bazaar where I bumped into Billy who has done 2 of my tattoos and is still in Patpong after 10 years. At the west end of Patpong we checked out an Irish bar but there was no air-conditioning so we moved on. We finally landed at The Cosmos where we had a bite to eat and a few beverages. This wrapped up our adventure and got us home in time for our girls without causing any dramas. 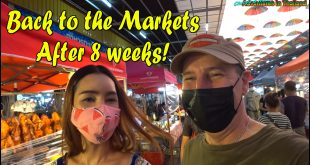 Back to the Markets after 8 weeks

Chanya found out that the Dalat World Market was open again and you know how excited she gets about Markets! 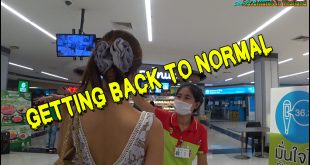 Slowly getting back to normal

Well, things are looking up for Thailand with the lockdown situation. Chanya was able to open the Salon today. 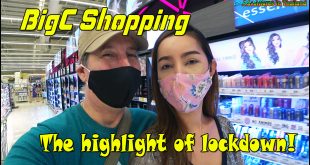 Who would think that the weekly shopping run would be the highlight of our life in these strange times!