I’m often looking for events that sound interesting and this time I’ve found a food fair down on the Chao Phraya river near the Iconsiam. I visited the Sermsuk Warehouse last year for a flea market so I thought it was worth the taxi fare. I also called up Tim who lives on our side of Bangkok to see if he was interested in going along too.

Well even though the event was smaller than I anticipated, there certainly was quite a range of tasty items on sale. I settled for a lasagna while Tim chose a pork dish and then we finished it off with some yogurt. There was a 100 baht cover charge but they did throw in a free beer which went down well on a hot day.

After spending a couple of hours there, we then made our way to find a ferry to take us over to the other side of the river. Tim suggested we pop back to Jacks Bar and watch the sunset. It was a bit of a challenge finding the right pier to jump on a ferry though as google maps were somewhat out of date.

We finally found the right pier and got across only to be challenged with a fair hike to get to the bar on the next street. One thing about Bangkok is that there always seems to be a lack of cross streets to link things up. Anyway, we sat down and chatted for a while, talked shop on YouTube issues and then headed home.

The Secret to a Happy Life – in Thailand

I'm always getting comments that I'm always smiling but that is because I'm enjoying a happy life here in Thailand. I'll let you in on the secret! 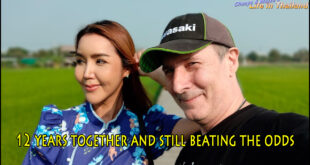 12 years together and still beating the odds!

It was 12 years ago today when I first met Chanya and we're still going strong even though some said it wouldn't last! 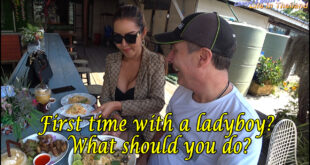 First time with a ladyboy? What should you do?

So you're in Thailand and you've just met a stunning ladyboy who is interested in you. What should you do?