It’s my birthday: Life is Good!

I never really put much thought into the whole birthday thing while living a conventional life where I traded my personal time for a paycheque but now that my time is my own, they do have a better standing in my life. There is some tension in the air today given the coup d’etat in Myanmar over the weekend. This put a slight damper on our usual family dinner outing because 2 of the people who work with Mother are Burmese and that is a little worrisome for some Thai’s in public places.

We started out the day with a trip out to a local temple to make merit then had lunch at farm bistro called Siam Salaya. As usual, it was a lovely setting in local rice fields with a water feature. After a small interlude, we then had dinner at Yaang Noi which is just a short motorcycle ride from home. We made a video of the place recently and they do the BBQ buffet for 199 baht. The real excitement for the evening was the special gift Chanya bought me which was a well kept secret and a total surprise! 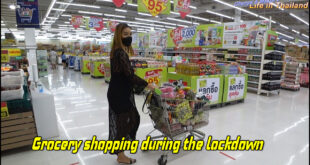 Grocery shopping during the lockdown

It's that time when we need to do a supply run and our usual street markets are closed. We're off to the Big-C! 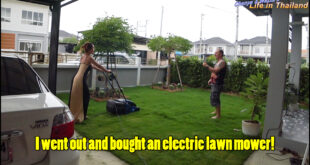 I went out and bought an electric lawn mower!

It says "electric lawnmower" on the box, but it feels more like a vacuum cleaner! Hahaha! 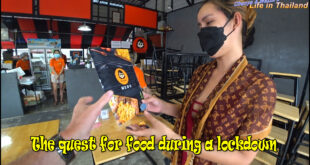 The quest for food during a lockdown

Our quest for food never stops and Chanya finds an eatery that makes giant burgers!